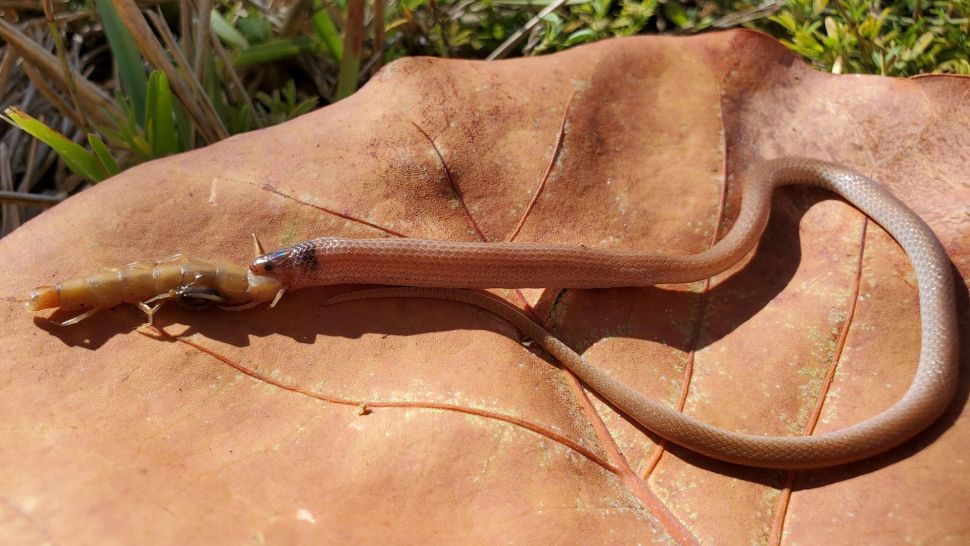 The rim rock crowned snake has been on Florida’s list of threatened species since 1975.

The rim rock crowned snake (Tantilla oolitica) is the rarest snake in North America, and scientists hadn’t glimpsed one in the wild in more than four years. But when one of the elusive snakes recently turned up in a state park in Florida, the sighting wasn’t a happy one the snake was a corpse in a gruesome wildlife death scene.

A visitor to the John Pennekamp Coral Reef State Park on Key Largo found the dead snake on Feb. 28; it had choked on a giant centipede that was still lodged partway down its gullet. (The centipede, which had been swallowed headfirst, was also deceased.)

While this grisly tableau suggests that the snake perished while choking on the monstrous meal the centipede was about one-third the size of its predator  it’s also possible that the snake succumbed to a lethal dose of the centipede’s venom, researchers suggested in a new study, published online Sunday (Sept. 4) in the journal The Scientific Naturalist(opens in new tab).

Rim rock crowned snakes are nonvenomous and have black heads and pinkish-tan bodies that measure 6 to 11 inches (15 to 28 centimeters) long, and they are found only in the Florida Keys and along the state’s southeastern Atlantic coast, according to the University of Florida’s Department of Wildlife Ecology and Conservation(opens in new tab). The snakes have been on the state’s list of threatened species since 1975; the last living specimen was spotted in 2015, while the last recorded sighting was a dead individual that had been killed by a cat in 2018, said lead study author Kevin Enge, an associate research scientist with the Florida Fish and Wildlife Conservation Commission.

“Rim rock crowned snakes have never been easy to find on Key Largo or elsewhere,” as these small, burrowing snakes spend most of their time hiding under leaf litter or in soil pockets, and are typically only seen after heavy rains force them to the surface, Enge explained.

“For snake lovers who keep a species life list, this is the Holy Grail in Florida but most snake hunters have never seen one despite weeks of searching,” he told Live Science in an email.

When the park visitor found the dead snake, which measured about 8 inches (21 cm) long, the reptile’s mouth was gaping wide and the back end of a 3-inch-long (7.3 cm) juvenile Caribbean giant centipede (Scolopendra alternans) was hanging out, protruding about 1 inch (2.3 cm). Park rangers then contacted scientists with the Florida Museum of Natural History (FLMNH) in Gainesville, who brought the snake and centipede to the museum’s herpetology collection. There, researchers preserved and analyzed the pair, hoping that the specimens united in death would reveal clues about the snake’s habits and biology. “Extremely rare”

“As a snake biologist in Florida, this finding was extremely exciting,” said study co-author Coleman Sheehy, a researcher and collection manager at the FLMNH. “We have 15 preserved Tantilla oolitica specimens at the Florida Museum, which is half of all the known specimens of this species known anywhere. We also have the holotype and paratype specimens, which are the specimens on which the original species description is based. However, we do not have any specimens like this that died while eating prey, and I don’t think anyone else does either.”

This find was extremely rare, “even for common species of snakes,” Sheehy told Live Science in an email. “In our entire collection, I think we may have two other snake specimens of other species that died while eating prey.”

To learn more about what, exactly, killed the snake, the scientists used enhanced computed tomography, or CT scans, to peer inside the animal and visualize its last meal, without physically damaging the specimen. It was unknown how long the snake had been lying on the path after it died, but the soft tissue was still intact and in good condition, revealing an unexpected wealth of detail.

“The trachea was so well preserved that we could actually see what parts along its length contained air and what part[s] were occluded,” Sheehy said. Their scans revealed that the snake’s trachea was compressed and may have been obstructed, possibly leading to asphyxiation, the scientists reported. Snakes frequently swallow large prey and can vomit it back up if necessary, but in this case, it’s likely that “the orientation of the numerous legs of the centipede made it difficult to regurgitate quickly,” Enge said.

Another possible cause of death may have been a venomous sting from the oversize front legs of the dying centipede during its journey down the snake’s throat. When the study authors examined the scans, they detected a wound that was barely visible externally but showed more damage internally. While this injury on its own wouldn’t have been life-threatening, it may have delivered enough venom to be fatal.

However, it’s also possible that the snake was wounded prior to swallowing the centipede and the venom did not prevent it from subduing its meal, the scientists noted. If this scenario is correct, it would suggest that the species has some resistance to centipede toxins,an adaptation that scientists have suspected but have not confirmed.

“This fluke finding of a freshly dead, intact specimen on the surface provided a rare opportunity to do some detective work using state-of-the-art science,” Enge said. “We were able to get a good idea of what killed this rare snake, which probably could not have been ascertained by dissection.”